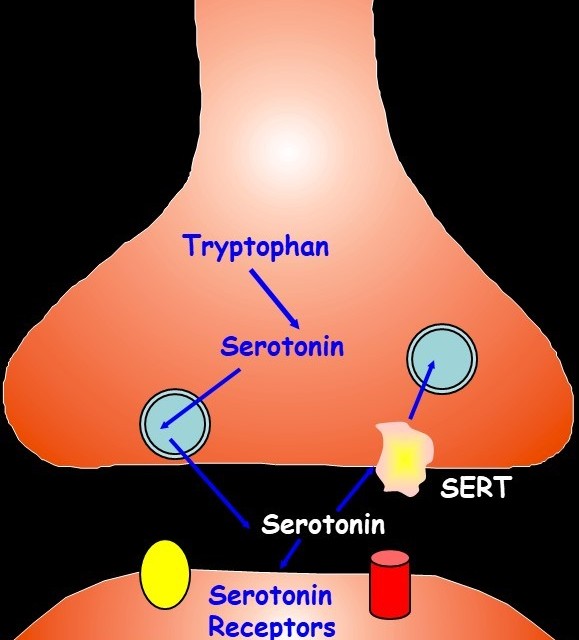 THE SEROTONIN TRANSPORTER (SERT) IN HEALTH AND DISEASE

Much of the research within the Behavioural Neurogenetics group focusses around investigating how genetic and/or environmental factors shape our brain and behaviour. With respect to the genetic factor, we are fortunate to have several genetic models in our group that we developed over the years. One of these is the serotonin transporter knock-out rat (SERT KO). The SERT is a protein that is specifically involved in the removal of serotonin (5—hydroxytryptamine, 5-HT) from the extracellular space back into the neurons. Thus, a reduction in SERT activity will lead to an increase in extracellular 5-HT. Importantly, many genetic studies in humans have found that a genetic reduction in SERT activity enhances the risk for different psychiatric disorders, such as major depression, anxiety disorders, autism spectrum disorder and drug addiction. Unfortunately, it is very difficult to assess from studies in humans whether a genetic change is causally linked to a disorder, as individuals often have multiple other genetic changes as well. Moreover, we know that environmental factors interact with genetic components, and of course people have different life histories. With animal research, on the other hand, we can ensure a similar genetic and environmental background thus allowing us to investigate the causality between genetic factor and behavioural/brain changes.

We have several different projects comparing normal (so-called wildtype, WT) rats with both heterozygous (SET HET) and homozygous (SERT HOM) knock-out rats. The SERT HET rats have about 50% of the SERT proteins compared to the WT, which is a similar reduction to that seen in humans with the genetic alteration in the SERT. The SERT HOM rats, on the other hand, have no SERT proteins at all. While this has not been observed in humans, it is often useful to investigate both SERT HET and SET HOM rats to see whether the effects get more intense with fewer SERT molecules (i.e. a so-called gene-dose effect).